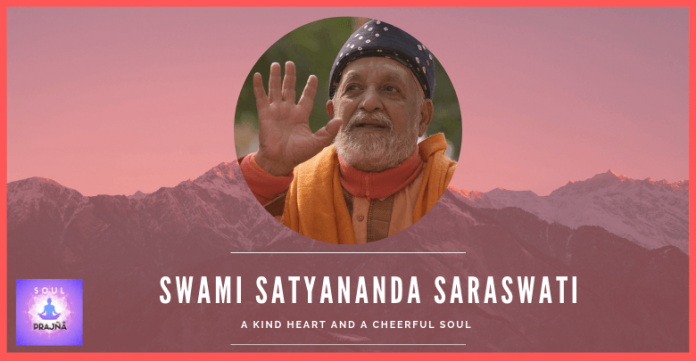 Swami Satyananda Saraswati lived what he had preached, his way of life was Yoga alone. He took up an initiative of spreading yoga across the world.

His teachings were emphasized on Internal Yoga with a strong emphasis on Tantra. He undertakes the International Yoga Fellowship Movement based on his Guru’s advice. He also establishes many centers across the globe named “Bihar School of Yoga”

Internal Yoga involves many forms of Yoga such as Qualities of Head, Heart, and Hands which in respect to the Intellect, Emotion, and Action. He stressed upon Physical, Psychological, and Spiritual wellbeing through his teachings.

Swami Satyananda introduced Yoga Nidra from a combination of Yogic and Tantric perspective to the world. Which is now become “Satyananda Yoga Nidra”.

Through Hatha Yoga, he reached the state of Jivanmukta.

Through Hatha Yoga, he reached the state of Jivanmukta.

Swami Sivananda Saraswati was a great spiritual teacher and a prominent Yoga and Vedanta practitioner.

He was the founder of the Divine Life Society in Rishikesh. Being a Doctor himself, he renounced the prestigious state of a Doctor from Malaysia and moved back to India to serve and look after the Sadhus and teach Yoga to the general public.

Being taught by the great gurus in his childhood, he was well versed in Sanskrit language and studied the Hindu scriptures in his early age of childhood.

Hatha Yoga is a method of aligning your physical body to the perfection to grasp the universal consciousness within.

Before meeting his Guru Swami Sivananda Maharaj, he already knew most of the theoretical stuff related to Yoga, Vedanta, and Spirituality.

He got initiated into the Dasanami order of Sannyasa by Swami Sivananda. He has been taught about Kriya Yoga too by his guru.

Swami Satyananda Saraswati sincerely followed his guru’s advice and reached the state of Jivanmukta through the practice of Hatha Yoga and Kriya Yoga.

He was spiritually inclined from an early age of his childhood and used to experience out of body experiences at the age of six.

Most of the Sadhus in his place has blessed him and suggested him to meet a Guru for higher spiritual experiences.

He even met Anandamayi Maa and blessed by her.

A life-transforming thing will happen after he came to Rihika. This is what he said in his own words.

Below are the few most important incidents of his spiritual sadhana.

After handing down the active work of his ashram and organization that he built from scratch, he leaves Munger by allowing Niranjanananda Saraswati to take his position.

He invoked Cosmic Mother through his Spiritual Sadhana and passed on his Spiritual and Sannyasa Sankalpa to his disciple Niranjanananda.

After he finishing off his duty allotted to him by his master, he went to Rikhia.

The fascinating words from the master himself.

“Of course I have been treading the spiritual path since I was 18. I have spent more than sixty years in sadhana. There is no sadhana that I have not done and there is no scripture that I do not know by heart. Oh, I did so many things but not once did my number come up in the lottery. But after coming to Rikhia, luck smiled on me and I got the winning number. A metamorphosis took place in my life and my destiny and everything became crystal clear. That metamorphosis was spiritual and universal.”

Swami Satyananda visits Rishikesh Ashram of Swami Sivananda in his young age based on the suggestions from many sadhus he meets before in searching for finding his guru.

Swami Sivananda had foreseen the capacity of this young spiritual champ and told him “spread yoga from door to door and shore to shore”.

Below are the words from the great Master Swami Sivananda about him.

“Few would exhibit such intense vairagya at such an early age. Swami Satyananda is full of Nachiketa vairagya.”

Below are some of the most fascinating discourses by the master on Consciousness and Shiva.

The science of yoga begins to work on the outermost aspect of the personality, the physical body, which for most people is a practical and familiar starting point. When the imbalance is experienced at this level, the organs, muscles, and nerves no longer function in harmony, rather they act in opposition to each other. For instance, the endocrine system might become irregular and the efficiency of the nervous system decrease to such an extent that a disease will manifest. Yoga aims at bringing the different bodily functions into perfect coordination so that they work for the good of the whole body.

From the physical body, yoga moves on to the mental and emotional levels. Many people suffer from phobias and neuroses as a result of the stresses and interactions of everyday living. Yoga cannot provide a cure for life but it does present a proven method for coping with it.

“Yoga is not an ancient myth buried in oblivion. It is the most valuable inheritance of the present. It is the essential need of today and the culture of tomorrow.”

When learning the practices of yoga, the guidance of a qualified yoga teacher is recommended. This text provides yogic practices and information for personal evolution. When practiced faithfully, under the guidance of a competent teacher, these techniques will expand your consciousness.

This book by Swami Satyananda Saraswati has been considered as one of the finest and comprehensive manuals of Hatha Yoga.

Books by Swami Satyananda Saraswati had got global recognition and his books on Yoga, Yoga Nidra, Patanjali Yoga Sutras, and many other books have got a lot of appreciation from all over the world.

In fact, he had written down more than 80+ books across different subjects in Spirituality.

Do check out the most valuable Swami Satyananda Saraswati books for detailed information.

SoulPrajna is not responsible for any monetary involvements related to the Swami Satyananda Saraswati organizations or any of the related properties mentioned over here in any way.

9 Best Paul Brunton Books to Read to lead us to...

Maha Bedha Mudra: 7 Great Benefits of it, How to Do...

Murcha pranayama: 13 Advantages and How to Master it? (VIDEO)

Tulasana: How to do it Perfectly? (10+ Benefits with Video)