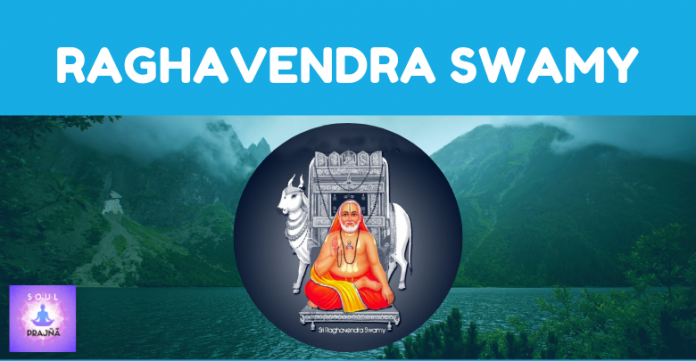 Message to the world from Shri Guru Raghavendra Swami:

Before he took Jiva Samadhi following are the last words from his lips, which are considered to be his message to the world.

These are the golden words from a great saint Shri Guru Raghavendra before he attained a state of Jiva Samadhi at Mantralaya.

Dvaita philosophy is a dualistic interpretation of the vedas. It also states that Vishnu as Brahman.

The absolute reality on which the whole existence based upon.

Raghavendra Swami Thirtha was an ardent devotee of Lord Shri Krishna (one of the forms of lord shri maha vishnu) and Lord Panchamuki Hanuman.

He attained enlightenment through his devotion to the lord vishnu after taking up sanyasa and serving humanity.

Sudhindra Tirtha was a pontiff of the matha at Kumbakanam.

He was a dvaita philospoher of aesthetics.

He worked relentlessly on creating Kavya, Alankara, and Nataka, which is considered to be unique in the history of Dvaita tradition.

Upon request of the lord of knowledge, Vidya Lakshmi in his dream to become a sanyasi to reach salvation.

He then took initiation to Sanyasa from his guru Sudhindra Thirtha.

Wife of Shri Raghavendra Swami Smt. Saraswathi desired to see her husband for the last time before he take up sanyasa.

While reaching the matha hurriedly, she accidentally drowned in an old and unused well on the way.

Due to her untimely death, she gets caught up in between heaven and earth.

Since her last wish to see her husband was not fulfilled, she went to the matha to witness the ordaining function with her subtle body (ghost body).

By the time she reaches the matha, Raghavendra Swami had already took sanyasa.

Shri Guru Raghavendra Swami senses her presence with his spiritual powers. He then sprinkled few drops of holy water in an intention to grant her moksha as she had done selfless to Raghavendra swami in purvashram (before sanyasa).

Rajinikanth a super star of Indian Cinemas is an ardent devotee of Shri Guru Raghavendra Swami.

In fact, he says he found his spiritual master and the wealth bestowed upon him through the grace of Shri Guru Raghavendra Swami.

He used to visit Raghavendra Swami Math in Chikpete, Bengaluru every thursday to get the prasad during his struggling period in his career.

He also desired to do his 100th movie to be on Shri Guru Raghavendra Swami.

In the movie, the another Indian superstar named Dr. Vishnuvardhan has played a role of Appannachari.

Once Nawab of Adoni wanted to meet Shri Raghavendra Swami after hearing about his miracles in the town so he sends his followers to bring him to his Palace.

Shri Raghavendra Swami comes to Nawab’s Palace on his request. Instead of being respectful to the great saint, nawab decided to test his spiritual powers. He orders to bring him a plate of non-vegetarian delicacies completely covered with a piece of cloth, in the guise of offering alms.

Alms are offered to request the seeking of blessings from the saints in Hindu tradition.

Shri Guru Raghavendra Swami took some holy water from his Kamandala, closes his eyes for few seconds and sprinkled it on the plate with non-vegetarian food covered with cloth.

He then uncovers the cloth to see the fresh fruits and flower.

Nawab awstuck by this miracle and bows down to swamiji and fell down at his knee for forgiveness. Nawab then offers a piece of land and wealth.

Instead of this land, raghavendra swami chooses a place near Manchale (present Mantralaya), which was part of nawab’s kingdom.

Nawab then orders his followers to build a matha.

After so many years, he told a devotee that the mantralaya is the same place where King Prahalada performed yagnyas to Lord Rama during the dwapara yuga.

Be Blessed by the Darshana of Shri Guru Raghavendra Swami:

Maha Vedha Mudra: Advantages and How to Perform it? (VIDEO)