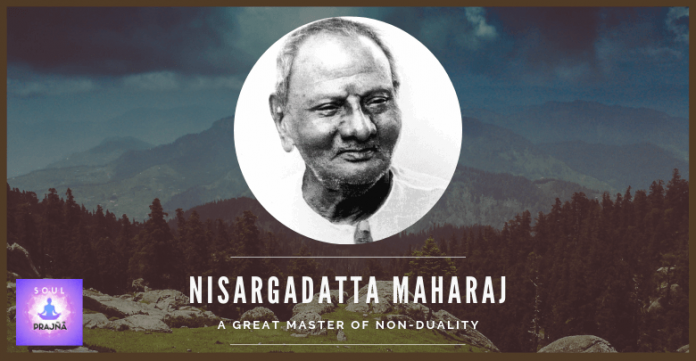 Nisargadatta’s core teaching was self-inquiry. He did not preach any spiritual practices to anyone except self-enquiry.

Inner conviction about one’s true nature that is the SELF is necessary without self-knowledge one bound to suffer from his own limitations he created.

He claimed that the names of Hindu deities Shiva, Rama, and Krishna were all the personification of nature (Nisarga). All of the names and forms arise from the same source which is the non-dual source or our own SELF.

Nisargadatta Maharaj’s core topics of his talks were about:

He used to say, you are not the body but consciousness. Because of consciousness alone you this awareness of “I am“. It is just pure beingness.

This “I am” has expressed itself in many names and forms. As a seeker, you should firmly get established in “I am not the body” but Consciousness which is “I am”.

Jnana Yoga (A path of knowledge).

How did Nisargadatta Maharaj experience Enlightenment?

Through Jnana Yoga (Self-enquiry) he reached the state of Jivanmukta (liberated living soul).

About guru of Nisargadatta Maharaj

He was initiated into Navanath Tradition by his guru Bhausaheb Maharaj from Karnataka.

After taking Mantra Diksha (Initiation) by his guru he followed regularly chanting of the mantra. 6 years after his guru’s death he got enlightened.

Siddharameshwara Maharaj is the guru of Nisargadatta Maharaj.

Upon his guru’s instruction he always concentrated on “I am”. I here represent the supreme consciousness which is devoid of ego-consciousness.

He has not followed any breathing techniques or studied any scriptures.

Whenever his mind drifted away from the thought “I am” he brought it back to its attention.

In 1933, Nisargadatta who was called by the name Maruti was introduced to Siddharameshwara Maharaj by his friend.

Maruti was initiated into Nava Nath Sampradaya (9 Nath Tradition) by giving him a mantra and instructed him on how to meditate on it.

He simply meditated on “I am” upon his guru’s instruction.

After his guru’s death, he lost his interest in worldly life and went to the Himalayas.

His brother persuaded him and requested him to stay in Bombay and practice spirituality within the worldly life.

The cigarette business he was doing was fetching him enough money for survival.

After his enlightenment, he started taking disciples in 1951.

If you are a genuine seeker who would like to know about the spiritual practices to realize your true self.

“When I met my Guru, he told me, ‘You are not what you take yourself to be. Find out what you are. Watch the sense I AM, find your real Self…’ I did as he told me. All my spare time I would spend looking at myself in silence…and what a difference it made, and how soon! It took me only three years to realize my true nature.” His message to us was simple and direct with no propounding of scriptures or doctrines. “You are the Self here and now! Stop imagining yourself to be something else. Let go your attachment to the unreal.”

Below is a list of rare videos of Nisargadatta Maharaj.

Here is a detailed explanation about Navanath Sampradaya (9 Naths Tradition) by Nisargadatta Maharaj.

Disciple Experience about the Nisargadatta

Below is the documentary of his disciple experience with Nisargadatta Maharaj.

Here is one more disciple named Shri Avadhootanand Maharaj ( formerly Dr. G.B Chavan ) who got enlightenment under the guidance of Nisargadatta Maharaj.

Below is his experience from his own words:

“It was the year 2000. One fine day, during meditation near the Samadhi place, Shri Avadhootanand Maharaj saw his guru as a very shining person of great proportion seated on a high throne. His seat was in the center surrounded by Gods- Shiva, Vishnu, Brahma, and others on all sides. His central seat was so high that Shri Avadhootanand had to look up towards him.

There was a brilliant light around him. Lamps of various colored flames were giving beautiful light. It was an eye-dazzling scene.

Shri Nisargadatta Maharaj was blessing him very joyfully raising his hand. This darshan was being seen in limitless space. His figure was as large as the horizons on both sides.

The revelations were made. The boundary of you and me was obliterated and everything was his beloved guru – Shri Nisargadatta Maharaj. Duality ceased to exist. Shri Avadhootanand Maharaj knew from his direct experience that he was his guru himself.

Everything was in him and he was in everything. Shri Avadhootanand Maharaj started receiving spontaneous answers to questions.

When self-realization was experienced by the grace of his Guru he began to give initiation through the Naam-mantra and discourses about the divine wisdom. But, still, after self-realization, he continues his guru’s bhajan in day to day practice, the same way Nisargadatta Maharaj used to do for his beloved guru Shri Siddharameshwar Maharaj.”

An Excerpt from the Light on Yoga Book

This is an excerpt from the book “I am that”, below Nisargadatta Maharaj has explained about the Awareness and Consciousness.

Interviewer: What do you do when asleep?
Nisargadatta: I am aware of being asleep.

Interviewer: Is not sleep a state of unconsciousness?
Nisargadatta: Yes, I am aware of being unconscious.

Interviewer: And when awake, or dreaming?
Nisargadatta: I am aware of being awake or dreaming.

Interviewer: I do not catch you. What exactly do you mean? Let me make my terms clear: by being asleep I mean unconscious, by being awake I mean conscious, by dreaming I mean conscious of one’s mind, but not of the surroundings.
Nisargadatta: Well, it is about the same with me, Yet, there seems to be a difference. In each state you forget the other two, while to me, there is but one state of being, including and transcending the three mental states of waking, dreaming and sleeping.

Interviewer: Do you see in the world a direction and a purpose?
Nisargadatta: The world is but a reflection of my imagination. Whatever I want to see, I can see. But why should I invent patterns of creation, evolution, and destruction? I do not need them and have no desire to lock up the world in a mental picture.

Interviewer: Coming back to sleep. Do you dream?
Nisargadatta: Of course.

Interviewer: What are your dreams?
Nisargadatta: Echoes of the waking state.

Interviewer: And your deep sleep?
Nisargadatta: The brain consciousness is suspended.

Interviewer: Are you then unconscious?
Nisargadatta: Unconscious of my surroundings — yes.

Interviewer: Not quite unconscious?
Nisargadatta: I remain aware that I am unconscious.

Consciousness is partial and changeful, awareness is total, changeless, calm and silent. And it is the common matrix of every experience.

It is at once recognised as the original, basic existence, which is life itself, and also love and joy.

Interviewer: Since reality is all the time with us, what does self-realization consist of?
Nisargadatta: Realisation is but the opposite of ignorance. To take the world as real and one’s self as unreal is ignorance. The cause of sorrow. To know the self as the only reality and all else as temporal and transient is freedom, peace, and joy. It is all very simple. Instead of seeing things as imagined, learn to see them as they are. It is like cleansing a mirror. The same mirror that shows you the world as it is, will also show you your own face. The thought ‘I am’ is the polishing cloth. Use it.

Books by the Nisargadatta Maharaj

These 8 fascinating books by Nisargadatta Maharaj will blow your mind on Self-realization. Do check out for more information.

If you think you need serious and sincere guidance, these books will suffice your desire to know your true nature.