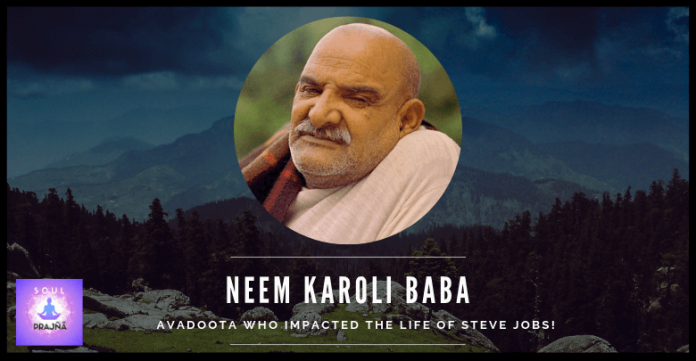 Guruji Krishnananda’s message to the world was introspecting, accepting and correcting our own mistakes are the steps in our Spiritual journey. He says Spirituality is changing, evolving and progressing continuously.

Through Bhakti Yoga he experienced enlightenment.

Who is Guru of Neem Karoli Baba?

Lord Hanuman was an ardent devotee of the Lord Shri Rama. He helped Rama in bringing back Sita to his husband Rama’s place. He also helped Rama in fighting the battle with Ravana.

Lord Hanuman is said to be the son of Vayu (Wind). He was very famous for his Celibacy and was also called as “Naistika Brahmachari“.

Neem Karoli Baba is said to be a wandering Sadhu. He left his home at the age of 11 and returned home.

Upon his father’s request, he got married at the age of 11. He fathered two sons and a daughter.

He practiced different sadhanas at a different time and he was famous for his miracles.

In fact, people used to call him Chamatkari Baba (Miracle-Baba).

He was an avadhuta and spent most of his time praying the Lord Hanuman and Lord Rama.

He followed the path of bhakti and service to mankind.

Once when he was traveling on a train without a ticket. Conductor after knowing this fact made him leave the train.

As soon as he was thrown away from the train, the train stopped.

People insisted conductor to bring the wandering sadhu back to the train.

After agreeing upon his conditions, the conductor requested him to come back to the train. As soon as he went inside, the train got started.

He traveled extensively throughout north India and called by many names by many people as he was wandering from place to place.

During his time, two main ashrams were built one in Vrindavan and other in Kainchi.

Neem Karoli Baba had great followers in the west. Some of the noted personalities are listed below:

These are few to mention. There are many devotees who have been blessed by his grace and blessings.

Steve Jobs visited India in 1974 and had been to Neem Karoli Baba’s ashram. He was desperate to see him. Unfortunately, he had passed away a month back.

The favorite fruit of Neem Karoli Baba was Apple. This inspired to make this as a log of Apple company.

You can even notice Neem Karoli Baba’s pictures portrayed with an apple in his hands most of the time.

Jai Uttal a noted musician and Steve Jobs were in the same school. Steve was a year younger to him. Uttal dropped out of the school and pursued his passionate career in music.

Later that year, he arranged a concert in the same school. After the concert got over both Steve Jobs and Jai Uttal met, Uttal spoke a lot about Neem Karoli Baba that has put the seed on Steve Jobs mind.

This made Jobs flew into New Delhi in April 1974.

Steve Jobs and Kottle visited the Ashram and stay for a long time. Since there were inclined to spiritual seeking, they listened to Neem Karoli Baba’s teachings.

They also used to meditate regularly during their stay at the ashram.

When they went back to the United States, both Steve Jobs and Kottle decided to start Apple Inc.

Kottle was the very first employee at Apple Inc. and the rest is history.

Last day when Neem Karoli Baba’s physical presence on the earth., everyone gathered around him and spent in prayers and singing of the lord names. Both Indian and Westerens were gathered.

Neem Karoli Baba put one of his indian devotees into Samadhi (A state of super consciousness, where the culmination of the meditator and the object of meditation takes place according to yoga shastras of patanjali.)

He then brings him back out of it by throwing his blanket over the man’s head.

He said to everyone gathers, “He is your guru. He is young and I am old. He will live and I will die!”.

He then told one of his western disciples to sing for Hanuman.

His eye were filled with tears. One of the Indian Women did arti before him, and all the received tilak upon the forehead.

This is an excerpt from the book “Miracle of Love: Stories about Neem Karoli Baba” by Ram Das.

Books by the Neem Karoli Baba

Here are 6 fascinating books on Neem Karoli Baba which will put you into trance approached with great devotion.

Neem Karoli Baba’s humbleness in serving humanity and uplifting the souls from the gross to the subtle level is unearthly.

Read the books to know his divine workings, understand and adopt his teachings to prosper in your life.

Be Blessed by the Master by Visiting his Samadhi Place

The details put up here are to bring about the awareness of the guru Neeb Karori Baba and their noble teachings to the layman’s understanding.

SoulPrajna is not responsible for any monetary involvements related to the organizations mentioned over here in any way.