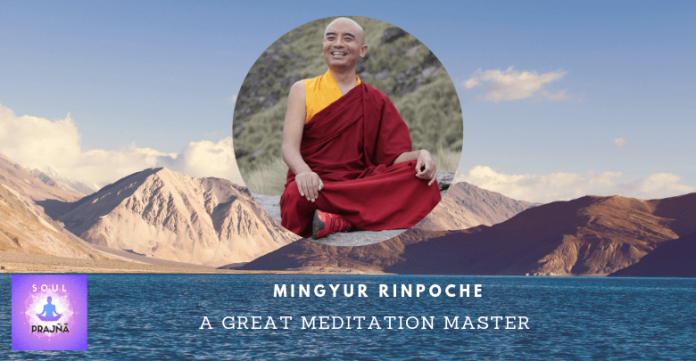 How did Mingyur Rinpoche experience Enlightenment?

He has never revealed anything about his Enlightenment experience.
Being an Advance Meditator, he says he is just a meditator trying to spread happiness and peace around the world.

He belongs to the lineage of Tergar. His father was his master or teacher.

He has been trained by his father Tulku Urgyen Rinpoche about meditation and Mahamudra teachings at the age of 8.

Ter is a Tibetan word for treasure, referring to the wisdom and methods that lead to the alleviation of suffering, the activation of our greatest potential, and ultimately to complete enlightenment. Gar means gathering and can connote bringing many people or elements together. So, Tergar can be understood as a place where people come together to find this sublime treasure, or as the coalescence of the causes and conditions enabling this transformational process of discovery.

Rinpoche leaves his home at the age of 9 with his father to learn the secret teachings taught to advanced meditators such as Mahamudra and Dzogchen.

Tulku Urgyen Rinpoche was a great meditation master of the 20th century from Kagyu and Nyingma lineages. He taught meditation to people of all backgrounds and beliefs and his teachings were mostly about the view of ultimate reality and then guiding his students to train in wisdom and compassion as expressions of the mind’s true nature of luminous purity.

Mingyur from the early age of 8 started practicing Meditation based on the guidance from his father who was a great lama from Kagyu and Nyingma lineages.

He was also learning about the techniques of Mahamudra which is considered to be secret and sacred from Tibetian Buddhism.

He practiced different forms of meditation and often went for solitude retreats.

Mahamudra is a spiritual practice that is used to attain Nirvana.

The practice of Mahamudra is often called as “Sahajayoga” and “Sahajayana” from Tibetan Buddhism, especially in Kagyu School.

For more information on Mahamudra, you can read here.

Mingyur Rinpoche on Living with Awareness

When the interviewer asked about his improvements in his meditation after his solitude retreat in Himalayas.

This is what he said.

“I learned many things from that experience, but there were two lessons in particular: at the beginning, there was fear—strong fear—because I became sick and almost died. It was at that point that I decided just to let it flow—to allow whatever happens to happen. That has really, really helped my meditation; that’s the first. The second is I learned a lot about life and how to live.”

~ Mingyur Rinpoche on Living with Awareness.

Here is a farewell letter written by Mingyur before leaving for his solitude retreat.

A Guided Meditation on the Body, Space, and Awareness with Yongey Mingyur Rinpoche

I’d like to say that everything got better once I was safely settled among the other participants in the three-year retreat at Sherab Ling.

On the contrary, however, my first year in retreat was one of the worst of my life. All the symptoms of anxiety I’d ever experienced – Physical tension, tightness in the throat, dizziness, and waves of panic that were especially intense during group practices – attacked in full force.

In Western terms, I was having a nervous breakdown.

In hindsight, I can say that what I was actually going through was what I like to call a “nervous breakthrough”. Completely cut off from the distractions of everyday life, I found myself in the position of having to directly confront my own mind – which at that point was not a very pleasant bit of scenery to stare at day after day. With each passing week, it seemed that the mental and emotional landscape I was looking at grew more and more frightening. Finally, as that first year of retreat came to a close, I found myself having to make a choice between spending the next two years hiding in my room or accepting the full truth of the lessons I’d learned from my father and other teachers: that whatever problems I was experiencing were habits of thought and perception ingrained in my own mind.

For three days I stayed in my room meditating, using many of the techniques described later in this book.

Gradually I began to recognize how feeble and transitory the thoughts and emotions that had troubled me for years actually were, and how fixating on small problems had turned them into big ones. Just by sitting quietly and observing how rapidly, and in ways illogically, my thoughts and emotions came and went, I began to recognize in a direct way that they weren’t nearly as solid or real as they appeared to be. And once I began to let go of my belief in the story they seemed to tell, I began to see the “author” beyond them – the infinitely vast, infinitely open awareness that is the nature of mind itself.

This is an excerpt from the book “The Joy of Living: Unlocking the Secret and Science of Happiness” by Mingyur Rinpoche.

Mingyur Rinpoche has written the most practical ways to reach the divine within his books, do check out his books on Joyful living, Death, Emotions, Thoughts, Practicing Tibetan Buddhism, Mahamudra, Mindfulness, Meditation, Mantras, and Physical and Mental Wellness.

All his meditation practices and techniques have been given in his books.

Do check out 13 mind boggling books of Mingyur Rinpoche.

The Joy of Living by Mingyur Rinpoche

Below is the testimonial on meditation retreat from the person who had attended it.

“The main benefit of retreat is actually that all of your time, the whole time — three-year retreat or one-month retreat or whatever time — is dedicated to practice. You have more time. Also, the benefit of retreat is application. You really have to apply the teachings, whatever you have learned. If you stay in retreat, then you have full time that you can apply whatever teachings you have received. You can really learn; you can really absorb the teachings. That is the whole purpose of the retreat.”

Anandamayi Ma: A wave of bliss and compassion (LOVE)

Ujjayi Pranayama: Advantages and How to Master it? (VIDEO)

Sun Yoga: Avoiding Covid-19 to Self-realization and Beyond!

Guruji Krishnananda: A Light Channel for 7 Rishis (MUST KNOW)

Mooji: An Inner Journey from Jamaica to India (TRUE STORY)