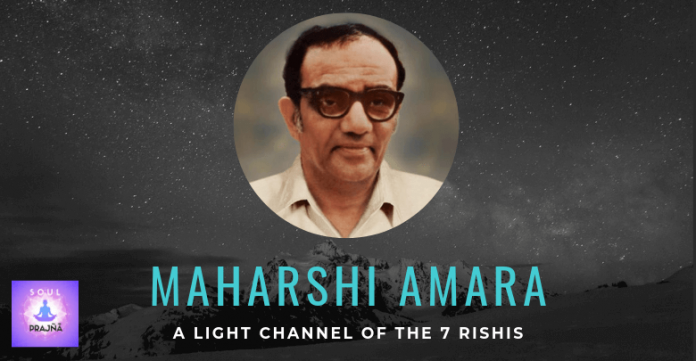 Do not accept or reject anything blindly. Keep an open mind. Develop inner faculties and perceive the Truth directly.

This was the message for the world from the great Rishi Amara.

Maharshi Amara followed the path of Meditation to realize his true nature.

How did Maharshi Amara experience Enlightenment?

He practiced intense meditation taught by the Great Brahmarshi Vishwamitra who used to appear before Maharshi Amara in his early young age of 9 and taught Meditation practices to Maharshi Amara.

Brahmarshi Vishvamitra is the most prominent and the most respected Rishi among the ancient sages in India.

He was the author of most of the mandalas of Rigveda.

Brahmarshi Vishvamitra was the author of the famous Gayatri Mantra.

Marashi Amara practiced highly intensive meditation sessions as taught by his guru Brahmarshi Vishvamitra and developed a lot of psychic and spiritual energies in a span of 2 and half years.

He practiced the advanced meditation practices that included light channeling.

Finally, he became a channel for the Sapta Rishis.

In fact, Vishwamitra Rishi introduces Maharshi Amara to the 7 Sages as a representative for our work in the Earth Plane.

When Maharshi was at the age of 9, he was suffering from tonsillitis and got admitted to the Hospital.

So, he was given anesthesia. During the operation, he was able to come out of his physical body and started traveling astrally across space to distant earth.

He then goes to the plane of existence where he saw a Goddess being seated on her Crown. All the people were prostrating before her. He also di the same thing as others did.

Maharshi Amara was touched on his shoulders by the one who was standing behind him on the line before Deva (God).

The Deva is said to be Surya Narayan (The Sun).

He then invited outside and where the great 7 sages were sitting in front of a tree.

Maharshi Amara prostrated before him. One of the sages among 7 told him that this place is only for the one who has left his physical body and died in human form. This is restricted to only a few people.

Rishi said he will come and meet Maharshi Amara in the near future and suggested him to go back to earth plane of existence.

Based on the Rishis advice, he came back to earth.

Maharshi Amara opened his eyes and started telling all the things he has had experienced in his astral travel. His parents got shocked and doctors ignore his stories.

After the successful operation, he returned to his home with his parents.

Days passed by and Maharshi Amara thought that what he had experienced might be just a dream.

One fine day, some strange person manifests before Amara when he was sitting with his eyes closed in his room.

Maharshi Amara opened his eyes and saw that he was none other than the Rishi he had met in his astral travel during his operation.

The Rishi appeared before him was none other than the great Brahmarshi Vishvamitra.

Brahmarshi Vishvamitra shown him few glimpses of other dimensional existence and asked him if he is interested in learning Meditation.

Maharshi Amara found this to be very interesting and accepted the proposal by Brahmarshi Vishvamitra and started learning Meditation from the age of 9 and realized his true nature by the regular practice of Meditation taught by his guru.

Source: “Doorways to Light”, a book by Guruji Krishnananda.

Do check out more information about the sage Guruji Krishnananda.

Another great being who helped the rishis to channel the light for the world.

Maharshi Amara’s direct disciple H N Ananda Giri talks about his experience with him below.

Ananda Giri wanted to know about the 24-hour cycle of Maharshi Amara. He then asked him several times but no luck. Amara used to keep quiet.

Ananda Giri stopped asking him about his 24-hour cycle.

He said, his day beings at 12 Midnight by visiting the Rishi’s cave near Mount Kailash where he marks his attendance and waits for the Rishis to allow him the work.

This meeting usually goes about for 6 hours i.e., till 6 AM.

He always has an unlisted telephone by his bedside which starts ringing. He again comes back to his physical body to pick up the call.

Due to frequent travel from astral to physical bodies, he would get tired. So he rests up to 9 AM.

At 10 AM, he goes out of his home to meet the people with whom he had spoken in the previous night.

He will come back home around 5 PM and be ready to meet the visitors of his home. He would talk with the people who have shown interest in learning meditation and other spiritual related discussions.

One more incident which had given clarity on the existence of Rishis to Ananda Giri.

When Ananda Giri was about to give initiation. He was instructed to stay outside in Maharshi Amara’s home and Maharshi Amara was in his Pooja Room.

Ananda Giri after a while knocks the door and requests for entering the pooja room.

Maharshi Amara accepts the request and allows him to enter the Pooja Room. Pooja Room was so small that even one can hardly sit or stand.

When Ananda Giri asked Amara that, you said Rishi is here but I am unable to see him.

For which Amara said, Rishis will be in the Atomic Light form, they do not need to sit or stand with their physical body just like us.

Ananda Giri experienced the presence of the Rishi in the Pooja Room after giving him the clarity on the existence of Rishis in the atomic form.

Why does Marashi Amara stand out from the 1,44,000 light channels?

Be Blessed by the Great Marashi Amara

Shri M: His Journey from Being a Muslim to a Yogi...

Mooji: An Inner Journey from Jamaica to India (TRUE STORY)

Buddha: From royal life to a realized life (TRUE STORY!)

Dattatreya: A Great Guru to have 24 Gurus (INSPIRING)