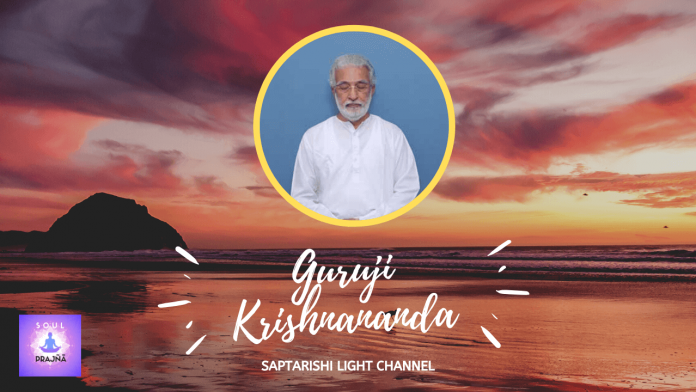 Guruji Krishnananda’s message to the world was introspecting, accepting and correcting our own mistakes are the steps in our Spiritual journey. He says Spirituality is changing, evolving and progressing continuously.

How did Guruji Krishnananda experience Enlightenment?

He practiced intense meditation as per his guru’s guidance to experience the truth (Super-consciousness).

Maharshi Amara is said to be the light channel for the great Rishis – 7 sages.

Maharshi Amara got enlightened at the age of 12 and started traveling astrally to finish the Rishis work for the welfare of human beings on Planet Earth.

He met Amara at the age of 39 after taking voluntary retirement from his work.

Upon his interest in learning Meditation, Amara taught him in-depth Meditation techniques to Krishnananda.

He followed the practices sincerely to experience the state of enlightenment one fine day.

Below is a wonderful conversation between Guruji Krishnananda and Maharshi Amara which will help give clarity on meditation practice and the journey of a meditator.

Krishnananda from his childhood days was searching for something that he was unsure about.

Upon Krishnananda’s interest in learning Meditation Amara fixes an appointment with Rishis for the initiation.

Krishnanada meets Amara the next day.

He sat in front of Amara and waits for the instruction.

Krishnananda breaks his silence and asks Amara that he is unable to see any Rishis over there.

Amara smiled at him and said they are in Astral Body now and you are unable to see them.

Krishnananda asks is ‘Meditation’ concentration? For that Amara replies No.

He then went on explaining about Meditation, and the Practices which was learned directly from the great rishis of the yore. He also tells that there are a lot of distorted versions of Meditation available in the outside world.

“Meditation is Silencing. We silence the entire system. Bod, Mind, and Intellect. Gradually, in Silence, many inner processes begin. First, the system gets cleansed. Then it is prepared to go through higher experiences which will eventually transform us into higher beings. We will be gradually linked to our Source and receive all the Knowledge about ourselves, this creation, birth, death, etc. directly.”

Amara also said Meditation is beyond the concentration. It is a journey in consciousness.

He then instructs him to close his eyes and focus his attention on the eyebrow center.

Guruji Krishnananda does the same as per the instruction.

He then experiences a wave of energy descending upon him and then he lost his consciousness.

When he opened his eyes Amara smiled at him and said one hour had passed.

Amara then teaches him the whole Science of Meditation.

Below are the testimonials on meditation session happened after the day of Buddha Purnima in Chaudaiah Memorial Hall, Bengaluru.

“I am so happy and fortunate that I was able to watch the webcast live. What a kind, gentle and peaceful man Guruji Krishnananda is! His message is so important in these times of wars, hatred between countries, hatred between religions and uneasiness and uncertainty of life as we know it.

Coming from a Roman Catholic background, I never once felt that I must give up my beliefs to be part of this powerful worldwide Revolution by Light. And I am sure there were many others from different religions, listening and watching the webcast. Never did Guruji Krishnananda bring religious ideologies into his talk. We all can live by our own conscience and still practice the simple Meditation technique to send positive Light energy (God) throughout the Universe.”

“That was such a beautiful Event! I have been so fortunate too, to have been able to participate in the event from the USA. Thank you so much for making it possible for everyone to participate no matter where we were in the world!”.

“I did not remind myself in any way of the event, but was guided by the Divine at the exact time, as it was beginning. It was a wonderful experience! I will continue channelling Light everyday on my own for the benefit of all humanity.”

“I feel very fortunate to have been able to tune in and listen to Guruji’s message with you all, during this time of global Spiritual transformation. His message was very important and inspiring and I for one will be calling upon the Rishis to help if need be.”

Below are some of the images of the event Light Channels Meet happened on May 7th, 2012.

In this book they have given a lot of Meditation Techniques to heal yourself, your surroundings, Shielding yourself from other negative forces in the world, manifesting the desires, thought power, and more.

Below is one such example where we are channeling the light for the world peace.

In the larger picture, Planet Earth is also our home, a dwelling place where the entire Humanity and all living beings co-exist.

Like everything that is created, it also has an energy field that protects, sustains and nurtures all life. When this energy field is strong and vibrant, there is peace and harmony in the world.

The effects of the Dark Age have dissipated and weakened this Energy field. Countless wars, fights, and negativities have wrecked havoc on the peace and well-being of this planet.

At a higher level, God and the Rishis are removing the negative effects of the Dark Age and ushering in the New Light Age.

We can add to this process by our individual practice of strengthening this energy field with Light.

Please do follow the below-mentioned technique to channel the Light to the Planet Earth for Global Peace.

This is an excerpt from the book “Communing with Light” by Guruji Krishnananda.

NOTE: Please refer to the Pranayama technique from the book for effective meditation.

Be Blessed by the master Guruji Krishnananda

12 Best Ramana Maharshi Books That Will Give Instant Clarity

Paripurna Navasana: How to do it Perfectly? (10+ Benefits)

Setu Bandha Sarvangasana: How to do it Perfectly? (10+ Benefits)

Anandamayi Ma: A wave of bliss and compassion (LOVE)

Shri M: His Journey from Being a Muslim to a Yogi...