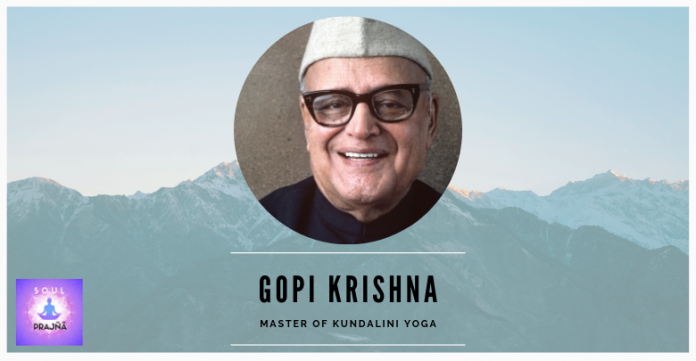 Message to the world from Gopi Krishna

Gopi Krishna’s life goal was to promote the scientific investigation of kundalini in the human frame of grasping. He hypothesized the theory of man reaching to higher consciousness through Kundalini.

How did Gopi Krishna experience Enlightenment?

At the age of 34 Gopi Krishna experienced the rose of his Kundalini.

He had no guru as such but followed Yoga practices to activate the kundalini.

Brief Introduction to the Spiritual Practice he followed:

Two events in his life made him practice the yoga.

First being his father’s renunciation of the material world. His father left his family when Gopi Krishna was at the age of 8 years. His mother took the responsibility of raising a son and two daughters. His mother was having high hopes for her son as to run the family.

Second being he disappointed his mother by failing in an exam in his college which didn’t create the opportunity to go to higher studies in the university. He attributed this to his mental indiscipline.

He then felt a great urge to prove himself to himself by resolving to lead a life of simplicity and austerity. He then refrained himself from his desires, reduce his needs, and gain mastery over himself.

He was not at all happy with his father’s decision of renouncing the world and instead he chose to live a life of a householder.

He meditated for years regularly which led him to stabilized his mental discipline and able to concentrate better. Over a period of years, he then developed the ability to sit for hours in concentration without any discomfort.

This had led him to experience enlightenment in the year 1937.

I sat steadily, unmoving and erect, my thoughts uninterruptedly centered on the shining lotus, intent on keeping my attention from wandering and bringing it back again and again whenever it moved in any other direction. The intensity of concentration interrupted my breathing; gradually it slowed down to such an extent that at times it was barely perceptible. My whole being was so engrossed in the contemplation of the lotus that for several minutes at a time I lost touch with my body and surroundings. During such intervals, I used to feel as if I were poised in mid-air, without any feeling of a body around me. The only object of which I was aware was a lotus of brilliant color, emitting rays of light. This experience has happened to many people who practice meditation in any form regularly for a sufficient length of time, but what followed on that fateful morning in my case, changing the whole course of my life and outlook, has happened to few.

During one such spell of intense concentration, I suddenly felt a strange sensation below the base of the spine, at the place touching the seat, while I sat cross-legged on a folded blanket spread on the floor. The sensation was so extraordinary and so pleasing that my attention was forcibly drawn towards it. The moment my attention was thus unexpectedly withdrawn from the point on which it was focused, the sensation ceased. Thinking it to be a trick played by my imagination to relax the tension, I dismissed the matter from my mind and brought my attention back to the point from which it had wandered. Again I fixed it on the lotus, and as the image grew clear and distinct at the top of my head, again the sensation occurred. This time I tried to maintain the fixity of my attention and succeeded for a few seconds, but the sensation extending upwards grew so intense and was so extraordinary, as compared to anything I had experienced before, that in spite of myself my mind went towards it, and at that very moment it again disappeared. I was now convinced that something unusual had happened for which my daily practice of concentration was probably responsible.

I had read glowing accounts, written by learned men, of great benefits resulting from concentration, and of the miraculous powers acquired by yogis through such exercises. My heart began to beat wildly, and I found it difficult to bring my attention to the required degree of fixity. After a while, I grew composed and was soon as deep in meditation as before. When completely immersed I again experienced the sensation, but this time, instead of allowing my mind to leave the point where I had fixed it, I maintained a rigidity of attention throughout. The sensation again extended upwards, growing in intensity, and I felt myself wavering; but with a great effort, I kept my attention centered around the lotus. Suddenly, with a roar like that of a waterfall, I felt a stream of liquid light entering my brain through the spinal cord.

Entirely unprepared for such a development, I was completely taken by surprise; but regaining self-control instantaneously, I remained sitting in the same posture, keeping my mind on the point of concentration. The illumination grew brighter and brighter, the roaring louder, I experienced a rocking sensation and then felt myself slipping out of my body, entirely enveloped in a halo of light. It is impossible to describe the experience accurately. I felt the point of consciousness that was myself growing wider, surrounded by waves of light. It grew wider and wider, spreading outward while the body, normally the immediate object of its perception, appeared to have receded into the distance until I became entirely unconscious of it. I was now all consciousness, without any outline, without any idea of a corporeal appendage, without any feeling or sensation coming from the senses, immersed in a sea of light simultaneously conscious and aware of every point, spread out, as it were, in all directions without any barrier or material obstruction. I was no longer myself, or to be more accurate, no longer as I knew myself to be, a small point of awareness confined in a body, but instead was a vast circle of consciousness in which the body was but a point, bathed in light and in a state of exaltation and happiness impossible to describe.

After some time, the duration of which I could not judge, the circle began to narrow down; I felt myself contracting, becoming smaller and smaller, until I again became dimly conscious of the outline of my body, then more clearly; and as I slipped back to my old condition, I became suddenly aware of the noises in the street, felt again my arms and legs and head, and once more became my narrow self in touch with body and surroundings. When I opened my eyes and looked about, I felt a little dazed and bewildered, as if coming back from a strange land completely foreign to me. The sun had risen and was shining full on my face, warm and soothing. I tried to lift my hands, which always rested in my lap, one upon the other, during meditation. My arms felt limp and lifeless. With an effort, I raised them up and stretched them to enable the blood to flow freely. Then I tried to free my legs from the posture in which I was sitting and to place them in a more comfortable position but could not. They were heavy and stiff. With the help of my hands, I freed them and stretched them out, then put my back against the wall, reclining in a position of ease and comfort.

Source: Kundalini the evolutionary energy in man by Gopi Krishna

Here is a mind-blowing experience of Kundalini awakening from Gopi Krishna himself. Watch the video.

Another remarkable event of my childhood at the age of eight which I remember more vividly occurred one day as I walked along a road in Srinagar in early spring on my way to the house of our religious preceptor. The sky was overcast and the road -muddy, which made walking difficult. All at once, with the speed of lightning, a sudden question never thought of before, shot across my mind. I stood stock-still in the middle of the road
confronted within to the depths of my being with the insistent inquiry, ‘What am I?’, coupled with the pressing interrogation from every object without, ‘What does all this mean?’ My whole being, as well as the world around, appeared to have assumed the aspect of an everlasting inquiry, an insistent, unanswerable interrogation, which struck me dumb and helpless, groping for a reply with all my strength until my head swam and the surrounding objects began to whirl and dance around me. I felt giddy and confused, hardly able to restrain myself from falling on the slimy road in a faint. Steadying myself, I proceeded on my way, my childish mind in a ferment over the incident of which, at that age, I could not in the least understand the significance. A few days later I had a remarkable dream in which I was given a glimpse of another existence, not as a child or as an adult but with a dream personality utterly unlike my usual one. I saw a heavenly spot, peopled by god-like, celestial beings, and myself bodiless, something quite different —diffused, ethereal—a stranger belonging to a different order and yet distinctly resembling and intimately close to me, my own self transfigured, in a gloriously bright and peaceful environment, the very opposite of the shabby, noisy surroundings in which I lived. Because of its unique and extraordinarily vivid nature, the dream was so indelibly
imprinted upon my memory that I can recall it distinctly even today. The recollection of the scene in later years was invariably accompanied by a feeling of wonder at and a deep yearning for the exotic, inexpressible happiness enjoyed for a brief interval. The dream was probably the answer to the overwhelming, unavoidable question that had arisen from my depths a few days before, the first irresistible call from the invisible other world
which, as I came to know later, awaits our attention close at hand, always intimately near, yet, for those with their backs to it, farther away than the farthest star in the firmament.

“Gopi Krishna was a pioneer in the land of spirituality. His insights into the quantum nature of the body predate the scientific discoveries of today. I salute this great sage and scientist of the twentieth century.”