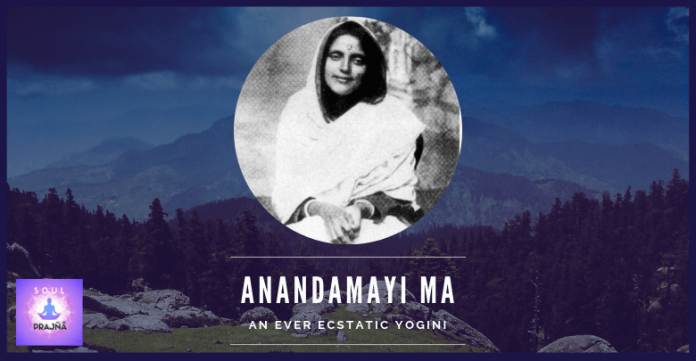 As you love your own body, so regard everyone as equal to your own body. When the Supreme Experience supervenes, everyone’s service is revealed as one’s own service. Call it a bird, an insect, an animal or a man, call it by any name you please, one serves one’s own Self in every one of them. — Anandamayi Ma.

Path of Devotion or Bhakti Yoga and Tantra.

How did Anandamayi Ma experience Enlightenment?

She was born enlightened.

As she was born enlightened, she didnt practice any spiritual practice as such.

There is an incident on her enlightenment experience during her childhood days.

Below is the story of it where she was in bhava samadhi.

At the age of 7, mother of Nirmala Sundari Devi (previous name) was worried about her daughter’s mental development. Since Nirmala used to be in an indifferent and happy demeanor most of the time.

When Nirmala’s mother fell ill seriously, Nirmala was unaffected by the situations happened around her. Her relatives were puzzled to see this girl child remaining apparently unaffected.

After Nirmala Sundari Devi got married to moved with Ramani Mohan Cakravarti (later renamed as Bholenath) she used to attend kirtans and bhajans at the local temple. As and when she started listening to the Lord’s names through kirtans she used to fell at bhava samadhi.

She then renamed as Anandamayi ma by Jyotiscandra Ray the early disciple of anadamayi ma.

This was occurring from her childhood days.

She used to work hard but unable to concentrate as she was going to the state of trance often times.

Her brother-in-law died when she was 18 years old, she then moved to her husband house.

When her husband approached her with sexual thoughts, she would exhibit the qualities of a dead person and she would grow faint. He used to repeat mantras to bring her back to normal consciousness. Her body would sometimes become distorted in various ways or stiffen.

In extreme cases, she had also given electric shocks spontaneously when he tried to touch her.

Bolanath thought it was time being but it happened to be permanent.

Even after the suggestions from his relatives, he didn’t remarry any other women instead he took her as his guru and took initiation from her.

Once this happened in 1922, the night of August when Anandamayi Ma was 26 years of age. She did her own initiation as she had no formal guru as such. She later explained the ceremonies and it’s rites were being revealed to her spontaneously as and when they were called for.

Even though she was not aware of those methodologies, the complex rites corresponded to those of traditional, ancient Hinduism, including the offerings of flowers, yantras (mystical diagrams), yagna (fire ceremony).

She later explained there are 4 stages involved in spiritual evolution. Below are the four stages she explained to her devotees.

She also told that as a master I revealed the mantra and as a disciple, I accepted them and started to recite them.

Disciple Experience about the Guru

“In the early 2000s when I was still studying with my diksha teacher, Anandamayi Ma started appearing in my dreams. I didn’t know much about her. I had seen the occasional picture of her. I had never read or heard any of her teachings.

I was highly resistant to accepting that the Ma who appeared in my dreams was really Anandamayi Ma. She seemed to be indicating that she was my Guru. I had been taught not to take dead people as Gurus. Too much opportunity for fantasy. I still think this is good advice.

Nonetheless, each time I had a dream in which Ma appeared, I woke up in an extraordinary state. It was as if my body, energy, and mind had been swept clean by a storm. I felt pristine, clear and sparkling with aliveness. I felt integrated with life and at ease, in a way, I had not experienced before.”

An Excerpt from the Light on Yoga Book

Anandamayi Ma has a message for everyone, not only for Truthseekers and the educated but also for the illiterate peasant, the laborer, the emotionally or mentally unbalanced, the transgressor and the evil-doer;

“This body tells of one sovereign remedy for all ills: God. Trust in Him, depend on Him, accept whatever happens as His dispensation, regard what you do as His service, keep Satsang, think of God with every breath, live in His presence. Leave all your burden on His hands and He will see to everything, there will be no more problems.”

Be blessed by the guru in her Samadhi Shrine: